Clara and I keep talking about how many people we are going to have to thank. We have started keeping a list so we don't forget any of the endless contributions. Not only are there the usual suspects--production teams, supportive friends, family, thesis supervisors--but also, a whole host of people who have stepped up to help with this project. There is my Dad, who has composed a musical score for the play. There is my mother, who crocheted a white collar for me to use and who gave me a collar my grandmother had crocheted. There is Clara's father, who gave her paper samples and books on pop-ups. There are Celi and Monica and Katy and so many others, who immediately went through their closets and brought us anything white they weren't using or didn't plan to use. There is Owen, who will be knitting us a hat for Lavatch. There are the women at the wedding shop who gave us fabric scraps for free. Although we have asked for some of them, many of these things have been offered without request, out of curiosity or excitement. It is so lovely to think about the ways in which this play will have been built, not just by the cast and production team, not just by thesis supervisors, but by an entire community of people. 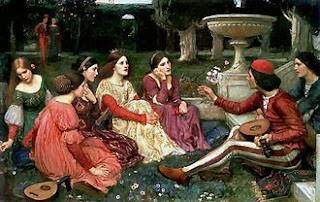 As Clara and I spent the week looking at other versions of the All's Well tale--including the story of Giletta de Narbonne that Shakespeare likely used as a source for the plot as well as various related tales about clever wives and the fulfillment of tasks--I have been thinking about the ways in which storytelling is also a community event. Each version of a story is unique--something the teller fashions in a way that is idiosyncratic to their own gifts and abilities. Shakespeare adds clowns. Some versions include an exchange of horses, rather than rings, as a token of the bed trick plot. But these versions also find a way to situate themselves in the conventions of the community from which they come--and then to shape those communities as well. And, although I have been reading written versions of these tales, many of them come from oral traditions (indeed, The Decameron, the original source for the Giletta story, calls attention to this tradition, situating the stories within a frame narrative in which a group of young nobles tell stories to each other as they escape the plague in the Italian countryside)--which are, by nature, communal. Stories are shared not only with a horizontal community, but also with a vertical one, where the tale is shared within a community and then handed down generation by generation through time. Community is at the heart of the tradition from which this story was born, and it is at the heart of the way this production is being created. And it is lovely to watch it unfold.

Illustration of The Decameron by John William Waterhouse
Posted by Taylor at 2:28 PM